Let he who names this virtuous tome some conflagration of the “urban” and the “fantastical” be forever shamed.

In other words, I’m not a fan of urban fantasy.

I loved Paternus, which is one of the most singularly inventive, creative and exciting works of fiction I have had the pleasure of reading.

To give too much of the plot away would be to go a great disservice to the tale Dyrk Ashton spins in this surprising account—and it does feel like an account—of what happens when myths stop being legend, and start being real. (Hangs head in shame.) Instead, let’s go for the big picture.

Interestingly, one of Ashton’s stylistic choices for Paternus was initially something of a turn-off for me. The novel is told in the present-tense with an omniscient narrator, and we often “pan in,” so to speak, to gauge various characters’ thoughts and impressions in a given scene. Most fantasy—most fiction, for that matter—is told in past tense. While the use of present had me picturing early scenes like something of a play in real time, it soon faded into the background of my conscious mind and lent a true immediacy to the proceedings. In hindsight, Ashton’s choice was the right one, so if you’re put off by it at the outset … keep reading.

As for the prose, it is both descriptive and lush. Ashton paints vivid scenes and then allows the reader to revel in them for a space of time before doing something absolutely insane with the drapery.

Along the same lines—and perhaps one of the most impressive things about Paternus—is its refusal to be bound by genre. Similarly, it doesn’t so much juggle disparate tones as meld them into a believable and sometimes emotionally-draining stew. (This is a good thing.)

The use of subtle humor throughout is balanced by frequent and escalating periods of tension, which are then broken by sudden and shocking occasions of violence that are preceded by well-staged preludes. And when said violence does occur, it blows right past the ridiculous and lands firmly in the realm of awesome, and I do mean that in the Biblical sense. An extended assault and desperate defense in the third act had me reading slack-jawed until the wee hours of the morning.

But again, it is the lead-up to said assault that lends the scene such heft. Ashton tells you the stakes at the outset, and he gives you the distinct impression that impending doom is least among them. This is a fight rooted in the deepest reaches of memory, something longed-for by the one side even as it is dreaded for its inevitability by the other.

There are many questions posed in Paternus. Luckily, the most pressing and obvious ones are answered … in time. If there is any warning to be provided to prospective readers of this one, it is the tendency for Ashton to jump between scenes, settings and characters in the first and second acts with some frequency. It could be a little jarring or disorienting for some, but trust that everything is in there for a reason. The longer you read, the more apparent that will become, and by the time the final act comes into focus, Ashton’s narrative and thematic momentum is rocketing like the lightning-charged spear of the Pater himself.

The author’s vast knowledge of the mythological is on full display here, and while some might find early sections heavy on the info dump, I couldn’t get enough of it. There is so much real rooted in the unreal that you’ll soon be hard pressed to distinguish the two, much like the principal characters, who are both admirably brave and likably naive. 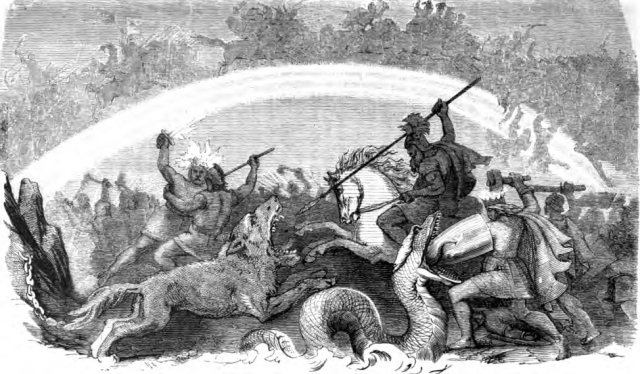 In terms of the series at large, the biggest questions are left unanswered, but the ending is both organic and satisfying, tying off several story threads while spinning out several more. Paternus seems to be pointing toward a sequel (or two) that will largely be able to forego much of the setup a first novel has to bear as a necessary burden.

Truly, Ashton’s greatest achievement with Paternus is his ability to render mythic figures believably human. These are beings that are quite literally capable of killing scores of super-powered adversaries. All but the most potent of Marvel’s Avengers would surely fall to their god-like might in the first exchange.

And yet, you fear for them not only because Ashton makes it a point to let you know they can–and sometimes will–be killed, but also because losing such figures—even the wicked ones—carries with it a profound depth of loss that is tied to collective memory itself. To humanity, and the stories we invent or call up to terrify, soothe, distract and inspire one another.

Paternus is a story about stories, the truths and lies that nest in the heart of them, and the consequences they leave behind when they die.