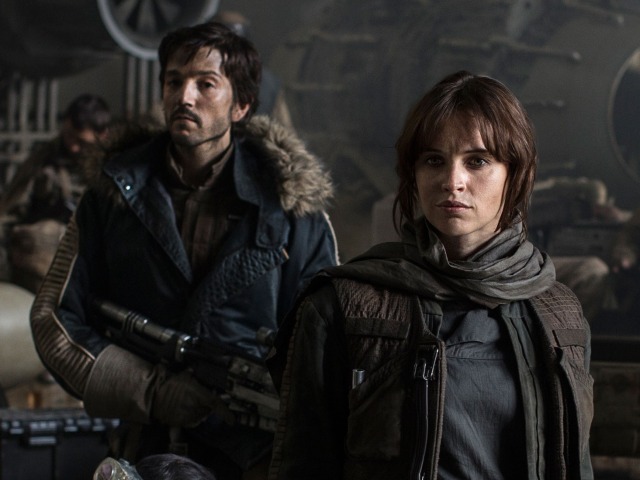 About halfway through Rogue One, I found myself taking a mental tally, going over the characters I’d met, the events that had already unfolded and the threads and arcs that had been set up, and wondering, flatly, whether or not I loved the film or merely liked it to that point.

While that may seem like a criticism on the surface, it’s really just a testament to the sort of layered, multifaceted film Gareth Edwards has given us here.

Halfway through this movie, I stopped seeing the characters as heroes on the page or screen and started reacting to them emotionally as if they were people – real people I was witnessing endure in the face of overwhelming odds. Despite the film’s flaws — and there are some — it is the characters who push this entry in the Star Wars canon from simply good into the realm of great.

The start of Rogue One is a bit uneven. We’re introduced to a multitude of characters and locations, each of them piquing curiosity but none of them sticking around long enough for the audience to settle.

On the one hand, this is a good thing: the movie moves along with a rolling momentum that builds to an incredible crescendo, but it was slightly jarring at times, with some settings and characters making so-so first impressions before getting the chance to shine later on.

What the first act does well in terms of story is in setting up the conflict between the Rebellion and the Empire as a true war in all its chaotic, exhausting, hateful glory. We see both sides presented — perhaps for the first time in the series — as opposing sides in a bitter and desperate conflict rather than as simple foils for good and evil. There are even some admittedly on-the-nose allusions to U.S. imperialism and terrorist insurgencies that may or may not play well to you, depending on your sociopolitical leanings.

From a design perspective, I loved the worlds we’re introduced to in Rogue One. The characters? They had me interested, but far from invested. That only happened over time, and it happened very subtly — so much so that I did not really know I cared about them until that third act hit.

From an acting perspective, I was underwhelmed with Ben Mendelsohn’s turn as the villainous Orson Krennic. He’s serviceable to the plot and overall narrative, but he’s a device with little to do other than to be an obstacle for our leads to overcome. Along the same lines, the normally-stellar Forest Whitaker gives an uneven performance as an eccentric extremist that is at once another obstacle and a potential ally.

And that’s where the meh performances end.

Felicity Jones proves herself admirably as a capable lead, with enough initial subtlety to let her later emotional outbursts and heroic moments stand out. Elsewhere in the rebel brigade, Donnie Yen and Alan Tudyk are scene stealers as Chirrut Îmwe and K-2SO, respectively, with Jiang Wen getting more to do as Baze Malbus than I imagined, given the marketing.

Still, none of these surprised or impressed me quite as much as Diego Luna’s breakout performance as Rebel Intelligence Officer Cassian Andor. Truth be told, I didn’t love Andor when the film started, and I’m not even sure I loved him at the end, but Luna — and the script writers — give him a depth the others are only able to hint at, and it paid off in a big way for me personally. He has the most complete arc in the film and arguably drives the narrative more than Jones.

These characters work because they feel real. I think that’s why the story has stayed with me on an emotional rather than intellectual level. Even their sometimes-jarring intros feel, in retrospect, true. I didn’t know if I liked these men and women at first because the movie wasn’t telling me I had to, and that takes guts to attempt from a storytelling perspective.

Watching Rogue One truly feels like peeking into another living Universe, and the impeccable special effects only add to that feeling. These are, hands-down, the best effects in a Star Wars movie to date — a mix of old (practical) and new (CGI) blended to make a seamless whole, not to mention the best space battle ever committed to screen.

Still, not all is perfect in the realm of digital wizardry, with one particular character’s inclusion hurling me right into the deepest canyon of the Uncanny Valley. It’s an odd decision on the part of the filmmakers, and one that’s difficult to look past, given how frequently it was on screen for me to pick apart. Fortunately, it’s an exception in an otherwise stellar presentation.

The entire last act of Rogue One feels like Saving Private Ryan in a Sci-Fi setting, with ebbs, flows and realism amidst the flash and sizzle. There are heroic stands that, when they occur, feel earned. Everyone has a role to play and nothing goes as planned. Erso’s rebels adapt or they die. Often, they adapt and they die.

Before the climactic battle, Erso implores her fellows to take chances, and when they succeed, to reach for the next chance, and the next one, and the one after that. All the while, the film is doing the same.

When the final credits rolled, I already knew that Rogue One was greater than the sum of its parts, just as its characters form a more perfect whole together where they might pale in one-to-one comparisons with iconic characters in the Star Wars lore. On the drive home, I liked the movie more than when I stepped out of the theater. Sitting here, typing this now, I like it more than I did then.

Like The Empire Strikes Back before it, I expect Rogue One to be highly rewarding to repeat viewings. It takes more risks than The Force Awakens and hits a few stumbling blocks along the way, ultimately resulting in a more affecting — if somewhat messier — film.

4 thoughts on “Rogue One is Something Special”