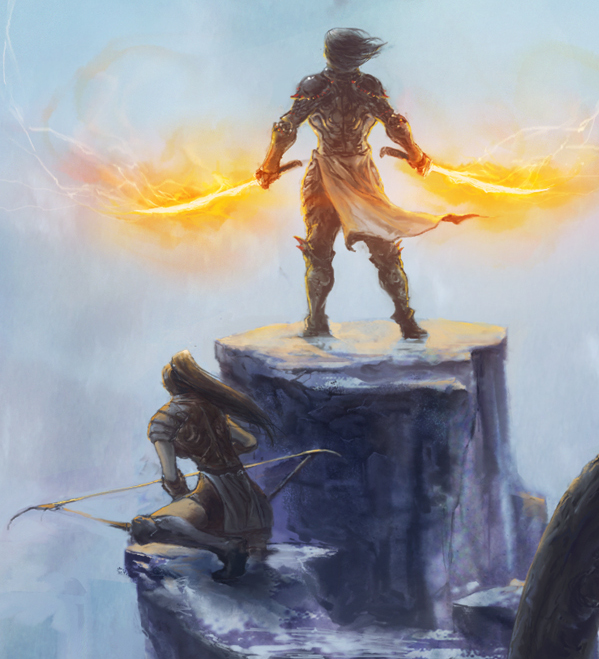 I’ve come across numerous threads — on reddit and beyond — wherein readers have asked fellow Fantasy fans to recommend series either with or (usually) without gratuitous amounts of romance, or, for lack of a better term (and because it’s funnier) banging.

Naturally, this caused me to sit back and wonder where Valley of Embers fit on the scale of romance-full to romance-less, and everything that comes along with that. I realized pretty quickly that Embers is fairly romance-less, and I thought it was strange that I had to think about it for more than an instant in the first place, seeing as I wrote the damn thing.

So, after some thinking, allow me to try to explain why my two co-leads (a man and a woman) do not become romantically involved in the core narrative of the story.

Reason #1 — I honestly never even considered it …

That gets that out of the way at the top.

Now, to try to psychoanalyze myself in order to discover WHY I never considered it.

Reason #2 — It may have detracted from the urgency of the plot.

Valley of Embers is a quest-based Fantasy, but I tried to do something different than your standard coming-of-age story. Kole and Linn, the co-leads, are young, but they’re undoubtedly adults. I did this for two major reasons: so you’d believe them to be as competent in battle as they are, and so I could skip past the angst section of their teenage years.

At its core, this is a novel wherein the boy tries to save the girl, but it’s also a novel wherein the girl tries to save the boy. Only, one has to leave the other in order to do it, and really, both are doing what they’re doing for the greater good rather than for each other specifically. I don’t want to get into spoilers, but, suffice to say it’s very clear that these two care for one another deeper than knowing. That said, having a romantic arc at the core of the plot would take away from the plight of the Valley and all its people.

The only thing I find more reprehensible than a hero than who puts him or herself above others is one who puts a lover above the rest.

Reason #3 — I didn’t want to define the one with the other … at least, not like that.

Valley of Embers may be Kole’s story, but Linn may well be my favorite character. (That might tell you something about where things are going. It might not.) But I made a conscious decision early on not to define the one through the other based solely on their shared history.

Of course, the two do share a history, and it’s a pretty extensive one. That said, every good story needs a theme at the center, and as this series goes on (hell, as Book 1 ends) they begin to define each other through their actions and — most of all — through their intentions, and not always in the best of ways. Each is a foil for the other, and since (romantic) love is not at the heart of what I’m trying to accomplish with this series, it just didn’t have a place when you’ve got things like vengeance, regret, fear and rage driving the core narrative.

Just because Kole and Linn don’t bang in Valley of Embers does not mean they never have. In fact, I’ll go ahead and let you know right now (as you discover in a throwaway line in the novel) they have. Definitely more than once. Probably more than thrice. And they may in the future. I’m not anti-romance, here.

I injected that hint/reveal for a reason. While there are demons to slay and gods to confront, battles to be fought and loved ones to save, the intent of The Landkist Saga is to create heroes that are admirable AND deeply flawed rather than admirable BUT deeply flawed. Rather than doing something as simple as giving one an anger problem and the other infuriating naivety, I opted to go with hubris for both, because every person on this planet is guilty of it.

At the start of the day, both Kole and Linn believe theirs is the right path to salvation, both for themselves, each other and their people as a whole. At the end of the day, all they know for sure is that they don’t have all the answers, but they don’t trust each other to come up with them either. I think that makes for compelling reading … in addition to the big fire battles and stuff.

So long as you intend to answer them …

6 thoughts on “Why Kole and Linn Don’t, You Know, Bang”